With 1,976 franchise restaurants across the US and Canada, yet one of the most difficult application process, you may wonder whether opening a Chick-Fil-A franchise is a good investment.

In this article we’ll look at the financials of Chick-Fil-A franchises by using the latest FDD numbers. We’ll look into questions like: how much sales you can expect to make, and more importantly, how profitable this franchise really is.

🔎 How does Chick-fil-A compare vs. other franchises? Check the ranking

Except for Alaska, Vermont, and Hawaii, Chick-fil-A operates in 47 US states and Washington D.C. Outside of America, the company has several restaurants operating in Canada.

Before Chick-fil-A came into existence, the founder S. Truett Cathy founded Dwarf House in 1946, which primarily focused on steaks and hamburgers. Today, there are 12 Dwarf House restaurants operational in the US. Chick-fil-A was founded in 1967 after Dwarf House became a success. The first Chick-fil-A restaurant was opened in Atlanta.

Apart from chicken sandwich, grilled nuggets are one of the most popular menu items of Chick-fil-A, and the company spent a whopping $50 million dollars and 7 years to perfect the recipe. Most of the money went into designing a special grill by Chick-fil-A scientists.

Chick-fil-A is a privately owned company, and it will never go public because of the last wish of the founder. Cathy actually signed a contract with his children which dictates that the chain will remain a private company, but his children have the freedom to sell off the company.

Chick-fil-A franchise comes with various advantages and disadvantages. Here is a quick rundown of the pros and cons you must be aware of:

How much does it cost to open a Chick-Fil-A franchise?

How much you need to invest?

Although, it is just an average, the amount can vary based on many reasons such as: location, size or type of the restaurant, etc. As per the latest FDD, the investment ranges from a minimum of $295,412 to a maximum of $2,431,608.

This investment amount reflects everything a business needs at the start. It is the sum of expenses like opening inventory, the first month’s rental of equipment, lease, insurance, and additional funds for operations to sustain losses the first few months.

What is the turnover of a Chick-Fil-A franchise?

This number vary depending on whether the restaurant is located within a mall ($1,570,000) or not ($6,884,000). In other words, restaurants that aren’t located in a mall tend to have turnover 4x times higher vs. mall units. 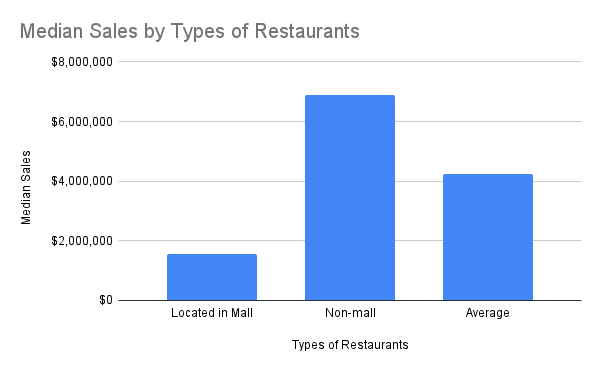 How profitable is a Chick-Fil-A franchise?

Looking at the financial information provided in the latest FDD, Chick-Fil-A franchises have an adjusted EBITDA margin of 21%.

Please note this operating profit only includes COGS, labor, rent and royalty and marketing fees paid to the franchisor. To obtain this number, we used the royalty fees as well as the rent expense provided in the FDD.

Yet Chick-Fil-A doesn’t not provide COGS nor labor costs. Therefore we used industry average percentages for those 2 instead (actually we used MacDonalds’ COGS ratio or 25% and labor costs of 29%).

Is a Chick-Fil-A franchise a good investment?

The profitability of a business doesn’t tell us much about whether it’s a good investment. Indeed, in order to know whether you should invest in a Chick-Fil-A franchise, you must compare the profits you earn vs. the investment cost you pay upfront (the payback period).

The payback period for a Chick-Fil-A is only 2.2 years, which is exceptionally good for a franchise in general. In other words, it takes a franchisee 2.2 years to recoup her/his original investment.

So from this standpoint we can argue that Chick-Fil-A franchises are very good investments. Indeed, anything below 4 is excellent.

Of course, these numbers are averages, and your franchise payback period may be different based on various factors. In order to assess whether your franchise is a good investment, download our financial plan template below.

How does Chick-Fil-A compare vs. other franchises?